Isn't it amazing how we can make a huge difference to a habitat and its inhabitants just by removing some of the aerial and mammalian predators that seemingly abound in this day and age. It's no surprise that some birds are struggling! Since 2011 we've legally removed carrion crows, magpie's, rats and foxes under the Wildlife & Countryside Act General Licence from one our WWA wetland areas that we manage. Prior to this you would see mallard nests robbed of eggs or the incubating female taken from the nest by the fox.  Evidence of broken song bird eggs indicated magpies were doing the damage to our residents throughout the breeding season. Five years on and we see a different story thanks to the effective removal of predators and the introduction of off ground duck nesting tubes as well as managing the wetland habitat. In fact we haven't lost a nest on the site to corvid or fox predation since 2011, even the Mallard and now Gadwall and Tufted duck are raising broods. Only 1 female has been killed on a ground nest by buzzard. So what have we created? We've provided suitable nesting sites, suitable areas of open water and vegetation cover for the broods to hide and obtain food from, as well as controlling the vermin. If a fourth leg can be added to the stool then we've provided supplementary feed during the post shooting season months when times can be hard for the birds preparing themselves for breeding. Wheat fed daily into the wetland,  creep feeders loaded with chick crumb to help the ducklings, moorhens and reed buntings......bird feeders hanging in the trees loaded with peanut and sunflower hearts......it's a wildlife paradise at the moment....Early duckling broods are doing well and we have greenfinch, blue tit, great tit, goldfinch, dunnock, chaffinch, and bullfinches feeding from the stations. The Gadwall and Tufted have returned again this year...We have had 14 successful hatches of mallard, 1 hatch of Gadwall and a hatch of Tufted (she raised 8 to adulthood).......and all down to getting the balance back in the favour of the nesting birds. 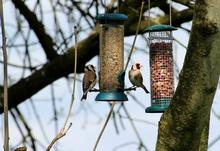