In February 2017 members of the Westmorland Wildfowlers Association attended a work party in which several floating platforms were made to act as the bases for duckling creep feeders which we intended to install in our major mallard breeding areas around the estuary, and on the WWA inland wetlands. After a cold start to April creep feeders have been erected and anchored in place on the drainage cuts and tarns. The shallow areas around them have been fed regularly with wheat/mashed sweetcorn to attract the adult mallard and to get them used to seeing these structures. Upon sighting the first broods of wild duckling, hoppers containing chick crumb have been put inside the creep feeders. We are delighted to say that duckling have found them and they are being used. Hopefully the chick crumb will give them a ready supply of food during the cold mornings/evenings and will supplement the fly life they are also taking. We have some lovely video footage and photographs of wild ducklings using the creep feeders with mother sat outside unable to eat the food that her brood is tucking into. WWA would like to thank the members who attended the work party, in particular Andy and Mathew Burrow for their help building the floating platforms. 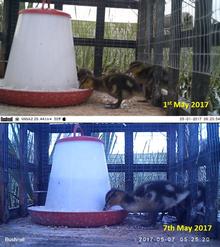