Saturday 3rd March 2012:-  Fourteen WWA members (Full, Country, Junior & Young Shots) put out 30 more mallard nests on the Cut at Heversham. It was great to see some of the membership turn up on the day in response to the Circular announcement. Where were the rest of the 100 members though I wonder? A big thanks to Shawy, Shep, Les, David, Billy, Callum, Thomas, Luke, Eccy, Stu, Mick, Matt, Peter & Stotty (and sons of some of the members) for all their hard efforts.

Saturday 10th March 2012:-  This second WWA work party aimed to maintain the Delta Waterfowl  'hen houses' that we put out last year and install 6 to 8 more barrel nests on the North side of the estuary. Shep & Darren were busy on St Johns digging in half a dozen more barrel nests. Thanks to our volunteers today. Mike Shep, Daz Barber, Robert, Sam, Shawy, Stotty, Stu, Mick & Matt (and Tom & Jake).

All three types of artificial nest have now been used by the mallard....wooden boxes, barrels and this season the  'hen houses' are in use.

Thanks to Alistair for providing 3 haylage bales and to Stu also for providing a bale and a half of hay. These have been used to create more 10 more 'hen houses'. 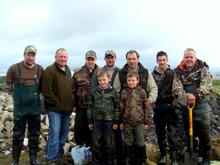